It wasn't until he was in his thirties that Jesus became a public figure.  He preached salvation through a belief in God and himself as the messiah.  He preached about dedicating one's life to the poor.  He had a small group of followers known as apostles who helped spread Jesus' message.  As Jesus became more popular, some leaders in Jerusalem saw him as dangerous because he challenged the "status quo."  He was brought up on charges of blasphemy. 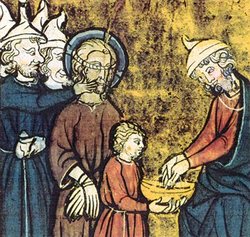 Pontius Pilate was the Roman governor of Judea from 26 to 37 C.E.  After being tortured and brought before a crowd, Jesus was sentenced to death.